A thin crust, Alsatian style flammkuchen pizza, topped with crème fraiche, onions and bacon is the answer to a quick delicious meal, perfect to be shared with good company.

When I mention Flammkuchen or tarte flambee to people, I mostly get the same reactions - they have never heard of it!! When I share a picture, they tell me it looks like a pizza!

Well, it's not far off as there are a lot of similarities with the Italian National dish but the speciality I'm talking about is: Flammkuchen.

Flammkuchen or tarte flambee (even called German pizza sometimes) is based on a thin dough that can be made with or without yeast, baked in a really hot oven. Traditionally topped with creamy crème fraiche, onions and speck (lardons) however we will show you a few other versions as well!

For those who are not familiar, Flammkuchen is nothing new! In fact it has been around for many years, just waiting to be discovered by you! I'm sure once you make it, you will LOVE IT as much as we do!

As with many inventions, Flammkuchen too has a lesser known story to it. The origins of tarte flambee lead to the bread making in the French Alsace region.

Back in the days, when bakers did not have access to thermometers, they had to determine if the oven was hot enough for baking bread. Hence they made these flammkuchen and placed them in the oven.

By watching the tarte (cake) flambee (flame baking) they would know if the oven was hot enough to load the bread or not.

HOW TO MAKE THE DOUGH

There are many recipes for the flammkuchen base and even though my French mother makes hers with yeast, I have adapted a recipe without yeast. The benefits of this recipe are:

To make the dough, simply combine the flour, salt, olive oil, water and knead with a dough mixer until all comes together.

Knead by hand for a further 5 minutes and leave covered to rest for 15 minutes.

Once the dough has been rested, cut into 130g (4.6 ounces) pieces and roll out very thin but not paper thin, about 2mm (.1 inch). I sprinkle the baking paper with semolina before placing the dough on top, this helps making it crispy.

Traditionally this tarte is baked in a woodfire oven and is sort of flamed, hence the name tarte flambee! To recreate this at home is difficult but there are ways around it. One being having a very hot oven!

I turn on my oven well in advance and set it at 220°C (425°F). I find that if you leave the baking tray already in the oven and place the rolled out flammkuchen with the toppings on the same tray, it crisps up the bottom and cooks faster.

Another great tool is a pizza stone - this will definitely get you the right crispness.

Made only with crème fraiche, sliced brown onions and lardon, however lardon is difficult to get in Australia, hence bacon is the best substitute plus it is easy to find.

Now, a few notes about these ingredients.

Crème fraiche is the key ingredient! When it bakes with the crust, it creates a slightly tart, creamy contrast to the crust’s crispness. But if you cannot find crème fraiche, use sour cream instead though keep in mind Sour cream has less fat and tastes more sour than crème fraiche.

Onions are traditionally added raw to the flammkuchen and give a nice bite even after baking. However this is not to everyone's liking that's why I like to lightly cook the onions for a few minutes without giving them any colour.

Bacon/Lardons are used as a topping as they are but again, I like to cook the bacon and then cut them into strips.

Once you have all your ingredients ready, it's time to assemble the flammkuchen! A layer of crème fraiche on the thinly rolled out dough, topped with onions and bacon strips! Baked in the oven... makes simply the most delicious treat!

By the way, in most French or German flammkuchen restaurants, these tarts are large and served to be shared while the next one goes in the oven but since we are showing you how to make these tarts at home, we have kept them small;)

This is the one my wife, Shilpi loves the most. A layer of crème fraiche, sliced, cooked potatoes and baked the same way as above.

Once baked, cover the tart with slices of smoked salmon, red onion rings and dill. I added leftover caviar from NYE but this is optional. Capers, lemon and horseradish are some other ingredients you could add to this version.

For a vegetarian version, I sliced Portobello mushrooms and sautéed them in the pan beforehand.

A layer of crème fraiche and Portobello mushrooms baked as above and finished with grated parmesan and truffle oil...honestly, such a treat!!!

Flammkuchen is easier to make than your average pizza! It is delectably delicious, quick and fun to get creative with. Try it, I think you will like it!

Similar to pizza you can add your favourite toppings on flammkuchen too:

If you are looking for similar oven baked tarts savoury or sweet try our asparagus and parmesan crostata, this oven baked french apple tart or this recipe for plum tarte tatin they all are delicious or try this german black forest cake!! 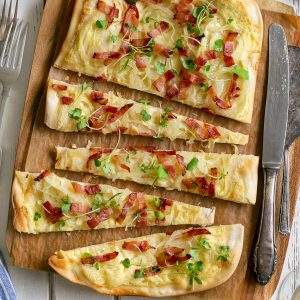 to make the dough