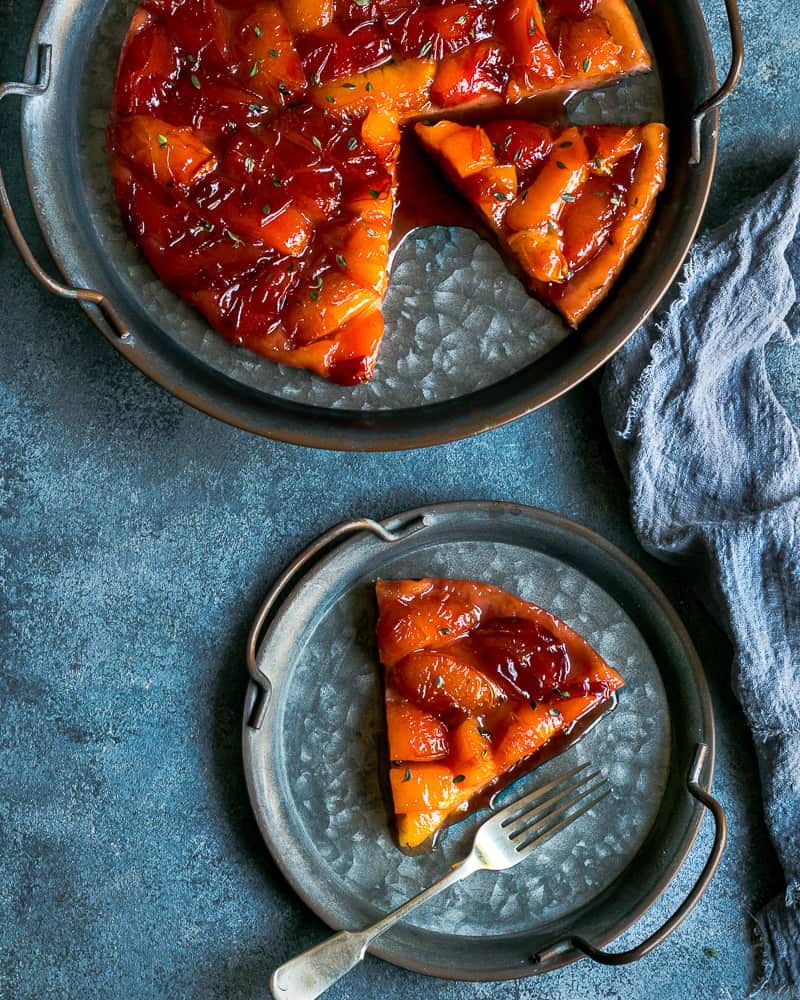 This classic French recipe for plum tarte tatin, not only has the mouth watering looks but it tastes heavenly good too! Made with stickily caramelised plums instead of the traditional apples , cooked while enrobed with a buttery puff pastry, it is a two step recipe, simple and quick.

One of our favourite desserts to order at a French restaurant is tarte tatin. Lately however, we haven’t seen one on any restaurant menu so we decided to treat ourselves by making our own – a restaurant experience in the very comfort of our home😉

Oh what a treat it was!! The juicy red plums perfectly ripe at the end of their season were the star of the tarte. They transformed into toffee plums without being overly sweet.

The addition of lemon thyme gave it a pleasant citrusy flavour and the rich puff pastry soaked in that sweet plum juice, turned the pastry from crispy to a beautiful chewy (that’s chewy in a nice way) texture. This upside down treat was certainly a success and that’s why we want you to recreate our recipe!

Here is our easy to follow, step by step recipe for making Plum Tarte Tatin:

Tarte tatin is a form of pie, that has been cooked upside down. Traditionally prepared with caramelised apples and covered with a pastry, it is actually easier to make than a pie itself.

Do you know how it was invented?

There are many stories about the origin of the tarte tatin but the most common one is that the Tarte was accidentally created in 1880 at the Hotel Tatin which was run by two sisters, Stephanie and Caroline. One day when Stephanie Tatin started out to make an apple pie, she left the pan of stewing apples too long.

Smelling the burning, she tried to rescue the dish by covering it with the pie pastry and quickly finishing it in the oven. Serving her upside down tart to the guests, she was surprised to see how well her dessert was received. This led to them naming the Tarte after their names and putting the tarte tatin on the their menu😊

Here’s all you need to make Plum Tarte Tatin:

How to make Plum Tarte Tatin

First we need to prepare the plums, cut in large wedges and tossed with vanilla essence. We love lemon thyme as it gives the dish a lovely citrussy flavour. When added to the plums and caramel, it give the tarte a more complex flavour. Leave the plums to marinate and get going on the caramel.

Pre-heat your oven to 190 degrees. Choose a pan that has the same size as your puff pastry sheet as the pan we are making the caramel in, will be the same pan we will cook the tarte tatin in. Simply combine the sugar and water in the pan and let it simmer down.

Now just watch it transform into a caramel. Once the caramel has taken a golden colour, switch off the heat and add the butter cubes carefully one by one. Keep in mind, the caramel is cooking at a high temperature so please be careful not to get any splatters on yourself!

Roll out the puff pastry

Set the pan on your working bench and arrange the plums in a mosaic style with the skin side down covering the entire bottom of the pan. Next cover the plums with the puff pastry, tucking in the sides like a blanket.

Make a few small cuts on top of the pastry to allow the steam to get through when the tart is baking. Start cooking by placing the pan back on the stove, let it just cook a minute on high heat, allowing the caramel and plums to combine.

Place the pan in the oven and cook for 35-40 minutes or until the pastry has puffed and turned golden brown. When the pan comes out of the oven, let it allow to cool for 3-4 minutes.

Now its time to flip the tart, the easiest way is to place a flat plate that is large enough to cover your pan and turn the pan around with the plate pressed against it. Serve the tarte with ice cream, creme fraiche, whipped cream or on it’s own….It’s delicious eaten anyway🤗

What can go wrong making this tarte tatin recipe?

As simple as it seems, there are a few things that can go wrong when you make the plum tarte tatin for the first time.

The plums can be overly ripe and release more juice than you want. This can lead to the plum juice overflowing out of your pan, making an absolute mess in your oven.

Too dark a caramel

Letting the caramel go too dark is one of those mistakes I have made many times. The trick is to remove the pan from the heat at the right moment.

Failing to flip the tarte onto your plate could be another nightmare. Run a knife around the edge of the pan to loosen the crust if you feel the tart is not loose enough to come out.

What to serve with Tarte Tatin

We served our Plum Tarte Tatin with a scoop of macadamia ice cream. Other flavours of ice cream which work well are pistachio, vanilla or yoghurt ice cream. You can also serve whipped cream or creme fraiche on the side. Traditionally tarte tatin is served on it’s own.

Tip: We recommend eating the Plum Tarte Tatin the same day while it’s still warm. Next day warming it up in the oven or microwave doesn’t do it justice.

Looking for similar desserts with fruits? Check out our Cherry Clafoutis Tarte , rhubarb and strawberries with coconut or French Apple Tarte. 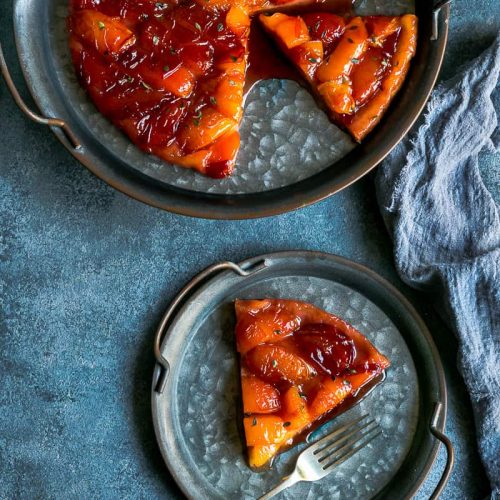 Shilpi & Etienne | between2kitchens
This classic French recipe for tarte tatin, not only has the mouth watering looks but it tastes heavenly good too! Made with stickily caramelised plums instead of the traditional apples , cooked while enrobed with a buttery puff pastry, it is a two step recipe, simple and quick.
5 from 3 votes
Print Recipe Pin Recipe
Prep Time 15 mins
Cook Time 1 hr
Total Time 1 hr 15 mins
Course Dessert
Cuisine French
Servings 6 people 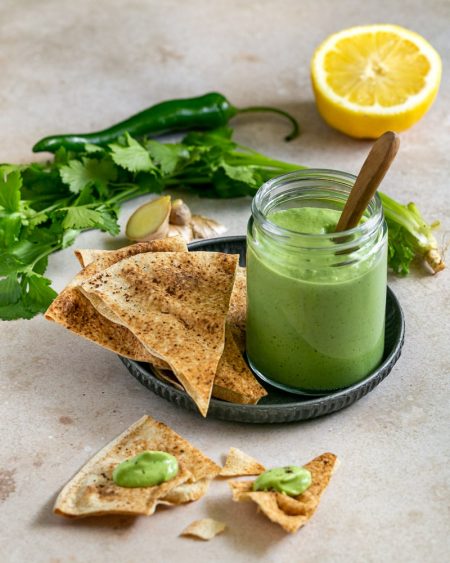